In the world of above ground swimming pools, rust is a big topic. A good-quality above ground pool can last a long time, but not forever. They can be in a really poor condition and still be a good working swimming pool. I’ve seen above grounds with missing top rails, some missing uprights, old leaky liners, and poor equipment and they are still safely useable. Above grounds can be old and installed out of shape and still stand. They can have all of their coves washed away and the pool’s bottom can be a lumpy, bumpy, wrinkly mess, yet it can hold water and be ready for a party. So what kills an above ground pool? What makes a pool owner say, “This isn’t safe and it’s time for this pool to go”? In a word – rust.

Rust (or corrosion for those who have aluminum pools) is an above ground pool’s number one enemy. Rust can be an eyesore, flake into the water, cause dangerous sharp or jagged edges, and eventually causes the pool wall to split open. I frequently have pool owners who ask me about rust. Most of the time rust is no big deal so here’s some basic info on the topic.

Why Do Some Pools Get Rust?

I have an answer to that but you’re probably not going to like it because it won’t help you much. My twenty-nine years of experience has taught me that rust happens for two reasons. The first is often impossible to confirm, but I’ve seen above ground pool parts rust out due to a manufacturer’s defect of some kind. Maybe the metal had a weak spot where it wasn’t made as thick or the anticorrosive compounds of a local area were not consistent with the rest. Or maybe a particular protective coating wasn’t properly applied. Again, this is very rarely something that can be confirmed, but occasionally there is a case that you can confirm.

A couple of years ago I installed a 15-foot round pool model called a Matrix. The Matrix is a nice, but expensive, model that has a couple of things going for it. It has been manufactured by Wilbar for many years which is good and it is unique in that its entire frame is made without any metal parts at all. It does not even have metal screws. The only metal parts of a Matrix model are the wall and the nuts and bolts that hold the wall together. Now after this pool has been in use for about six months, I got a call from the homeowner who said that there was a rust spot on the wall of the pool about halfway down. My first thought was that the pool had a leak in that area somewhere as constant moisture next to metal will eventually cause corrosion. However, it usually takes a lot longer than six months for the rust to start to show so this was odd. I chose to drive over to take a look at it. This pool had no leak and no sign of moisture and the wall wasn’t dented due to some trauma. The wall just had a spot that had rusted all the way through. This was clearly a manufacturer’s defect. Though, they are really rarely provable.

The second reason is much more common and unfortunately very vague. Above ground pool parts rust because the conditions are favorable for corrosion. I know this sounds like a politician said it because it’s way too obvious and general, but hear me out and let me try to answer this next question.

So Then What Makes Conditions Favorable for Corrosion?

There is a fairly easy answer to this, but in the real world it’s not always accurate.  Corrosion of course involves moisture and exposure. If the iron in steel is exposed to moisture, then the steel will rust in no time flat. Steel parts of above ground pools are galvanized which means zinc is bonded to the iron which protects it from moisture. Also, some above ground parts are coated with something to prevent moisture or water from getting to the steel. From this understanding then, if the steel stays protected and has limited exposure to moisture, then there should be no corrosion or rust. The reverse should hold true in that unprotected steel continuously exposed to moisture should corrode at a fast rate. In a laboratory that has a controlled environment where everyone wears white smocks, this will hold true 100% of the time I’m sure. In your backyard, though, it may not be so straightforward.

I’ve Seen It All

Well, I’ve seen it all, at least when it comes to rust and above grounds. I’ve seen rust where there shouldn’t be and no rust where there most certainly should have been rust. I’ve seen everything from steel walls soaking in water for years with no corrosion to super high and dry metal pool parts that have had no exposure to water rust completely apart. This is why I have this attitude as often corrosion will make no sense. There are some things you can do though to minimize a favorable condition for corrosion. Here they are:

If There’s No Rust, Don’t Do Anything
It sounds obvious, but if the pool is older and you have some top rails or top stabilizer bars or connectors that are looking aged but aren’t rusty, don’t sand them down and paint them. They may start to rust after you do that. I’ve seen it. They may not either. Who knows?

Got a Leak in Your Pool? Fix It Fast
A leak that causes the wall of the pool to be exposed to water won’t hurt the wall for a short time. If you let it continue though, the wall will likely eventually start to rust. Once something starts to corrode it continues to corrode even after the leak is repaired.

Same Applies to the Skimmer and Return
If there is even a small leak under the skimmer box or the return fitting at the wall, repair it quickly. Over time the leaking or dripping water will cause a downward line of rust to appear and the wall’s integrity will be compromised. That can kill your pool if you don’t catch it in time.

Maintain the Outside of Your Pool
Plants and grass hold moisture. Keep the exterior side of the pool’s wall free from anything overgrown. Have some rocks or mulch along the bottom perimeter to drain away any groundwater that may have collected. You can’t stop a pool from getting moisture on it, but you want it to be able to dry completely. Keeping the area clear will accomplish that.

Finally, some backyards are just more prone to have a pool rust out than others. If you have bought a pool and it rusted out, replace it with a newer model that is made mainly with resin parts instead of metal. It will cost you a little more, but will be worth it.

39 thoughts on “Above Ground Pools and Rust, Don’t Mix” 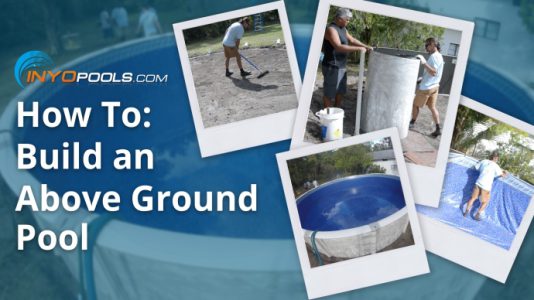 How To Build An Above Ground Pool

March 6, 2017
How To Build An Above Ground Pool This video shows the complete process for installing an above ground pool, from site...
Watch Now

Filling Your Above Ground Pool

February 19, 2016 Dan Dougher
So you’re finally getting that swimming pool. You’ve figured out which above ground pool to buy, how big it will be,...
Read Now

October 28, 2016 Dan Dougher
Above ground swimming pools don’t last forever. A good-quality above ground made in North America should last between 10 and 20...
Read Now