I have observed over three decades that the average decent quality above ground swimming pool lasts between 10 and 20 years. Sometimes pool owners will replace their pool because its top rails are too rusty or some of the uprights and pieces of bottom track have rusted out. Mostly though, people decide that their pool is dead because it has a rusty or corroded wall. And this is what makes an above ground pool no good anymore as it’s the wall that holds all the water.

Most of the time, a rusty pool wall is noticed when a liner is changed. The pool gets drained and then the existing liner is removed which exposes the interior wall. A sinking feeling is experienced when you see that the interior wall is rusty. You’ve already bought a pricey replacement liner. You start to ask yourself, “Is this normal? How bad is it? Can I fix this? How do I fix this?” As you climb out of the pool to go look for that can of Rust-Oleum you bought two years ago, you wonder how bad this rusty wall really is and instead go search on the Internet.

You’re Going to Have to Do Some Poking Around

This blog post is about advanced wall repair for above ground pools, but before I can tell you about that you must find out if you need it. Most of the time the discovered rust on the inside of the pool wall is just surface rust and not much of an issue. With surface rust you can maybe get some sandpaper, sand the rusty areas smooth, and then use that can of Rust-Oleum you found and the wall is good to go.

What if it’s more than just surface rust? Maybe the rust is falling off in small pieces and looks pretty bad and deep. What’s important here is the wall’s integrity. The wall of an above ground pool wall has to hold thousands of pounds of water so if the rust has eaten its way deep into the steel or aluminum, it may no longer be strong enough to hold the water. A wall can look pretty bad and still be fine, but if there are spots where it has rusted all the way through then that is bad and cause for alarm. To find out, take a medium-sized screwdriver and poke at the rust. Scrape off any loose pieces of rust and firmly poke those areas. If the screwdriver pokes completely through the wall, then that’s not good. It may not be the end, but it’s not good.

Some Holes Are Worse Than Others

So you’ve poked around the rust and the screwdriver went all the way through in a couple of spots. That’s always bad, but you may still be OK. A small rust hole that’s located high up the pool’s wall is usually alright.In that case I will cut a small square of roofing tin or some kind of sheet metal and use duct tape to secure it in place over

the area. I do this only to protect the new liner I’m about to install from the rust as this repair adds no strength to the wall.

If the rust holes are closer to the bottom of the pool’s wall, then that’s worse and should possibly require more than just a simple patch job. The reason a hole lower down is concerning is because the water creates more outward pressure there at the bottom. A rust hole at the bottom of the wall is much more likely to tear open under pressure and cause a “blowout” than one nearer to the top. In most cases a small hole towards the bottom of the wall won’t cause a blowout. I usually tell the pool owner about it, tape some tin over it, install a new liner and it holds. Though, there is always the possibility that it won’t hold and I leave the decision up to them. I’ll show them the concerning rusted area, give them the odds of whether I think it’ll hold or not, and let them tell me either to proceed with the change of the liner or wait and get it repaired. Worst-case Scenario

It has come down to this. Let’s say you have a lot of rust toward the bottom of your pool wall and it has rusted all the way through. What now? Well, there are three options at this point. You can tape over the rusty areas with some kind of sheet metal, install a new liner, fill the pool back up and hope for the best. This is a viable option for many as they have already purchased a replacement liner and don’t have the money for a new pool. Many times this is the best decision for them as the wall holds up and they get to have their pool. Though, with this option, you may not be so lucky, because if it doesn’t hold, you’re out the cost of the new liner, the installer (if you didn’t do it yourself), and all the lost water and chemicals.

The second option is not to take the chance and get a whole new wall. Or at least that’ll be what you think you’ll do until you try to find a replacement wall. It’s not easy to get just a replacement wall for an above ground pool as manufacturers don’t like to provide them for models which are more than a couple of years old. That’s OK though as you would soon find out, because if you do get lucky and find a replacement wall it’ll be way expensive. At that point in the story, people usually opt to get a whole new pool as the price is just slightly more than for just a wall.

The third option is to repair the wall. This is rarely done, though. The reason for this is not because it’s too expensive, looks bad, or doesn’t hold. Repairing a rusty above ground pool wall is rarely done, because there are not many people who know how to do it. Over the years I have learned by way of trial and error that there is only one true way to repair a wall and that is to add a new piece of wall from top to bottom.

The Only Guaranteed Way to Repair a Rusty Wall

Over the years I’ve tried to repair damaged pool walls in many ways. It was easy to experiment as people facing an apparent pool replacement would take a chance on my repair. I started by just duct taping some rigid steel sheeting over the holes and some failed. Then I would bolt the pieces of sheet metal to the existing wall all the way around the rust holes. Some failed. Then I tucked bigger pieces of sheet metal into the pool’s bottom track and upward to cover the holes and bolted them. Still some fails.

I finally realized that I needed to reinforce the damaged wall’s integrity from top to bottom and not just in the local bad spots. So, this is what has to be done:

Now you’ll have a piece of wall covering the bad place in the existing wall. And it’s bolted from top to bottom on both ends so the wall cannot split open when filled.

This is not an easy repair, but works well when done right. If you have a pool wall that has rusted away badly, my advice is to get a new pool to replace the wall and frame completely. If you don’t have the cash then try this. It may save you money, if you do it right.

159 thoughts on “Advanced Wall Repair for an Above Ground Pool”

Above Ground Pool Liner Types: The Good and the Bad

February 12, 2016 Dan Dougher
Like most things, above ground swimming pool liners have changed over the years. Back in the day when I started building...
Read Now

Will a Salt Chlorine Generator Rust My Above Ground Pool? 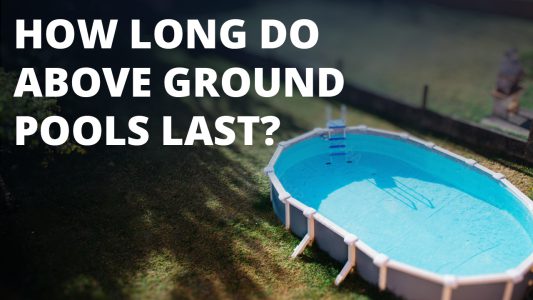 How Long Do Above Ground Pools Last?

July 6, 2022 Charlie Ramirez
Buying an above-ground pool online can create stress and anxiety. In addition to pricing and quality, most people want to know...
Read Now

Automatic Cleaners for Above Ground Pools

March 25, 2016 Dan Dougher
I’m not saying I’m old or anything, but I remember when swimming pools didn’t have automatic pool cleaners. At that time...
Read Now