We’re here with Jimmy from Century Motors. We’re just going to ask him some basic questions about his motors, his products.

The most common question we get is what is uprated and fullrated? What is the difference?

The difference between up rated and full rated is pretty simple. It’s a multiplier applier on the motor, horsepower times service factor equals total horsepower. Really, total horsepower is what you want to look for when you’re replacing a motor. If you have 1.65 total horsepower, you can use a full rated one horse or an up rated horse and a half, but they’re the same motor electrically. There are three types of motors; the single speed, dual speed, and variable speed. Why is the variable speed the most energy efficient option?

Further reading: Variable Speed Pool Pump or Dual Speed… Which is Best for Me?

Is there any application where you don’t think a variable speed worked? What options do you have for your VGreen, variable speed motors?

We have two options. We have our VGreen 165 here and we have a VGreen 270 over here. VGreen 165 is going to, again we’re talking total horsepowers, it’s going to replace anything from a half horse up to a 1.65 total horsepower motor. It comes in square and round flange. It’s a bolt-on replacement. When you take off a single speed motor, you can bolt-on VGreen 165 in its place, leave the existing impeller, just like you would with a standard motor replacement. With VGreen 165, you have a LED user interface. It allows for simple programming, three steps and an override that you can run on every 24-hour cycle. In addition to that, we also have a set of digital inputs built into the motor that allow you to work with third-party controllers as well as solar controllers. It gives you the most flexibility with applications where you need more control than just the UI on the motor.

Is there any big differences between the 1.65 control and the 2.7?

On the 1.65, you have to connect that to a timer or can that operate just by connecting it to a breaker?

You can connect straight to a breaker but we recommend connecting to your time clock and using your time clock to set a defined start time every day. For example, your timer comes on at 8 AM, it applies power to the motor at 8 AM and then your schedule starts every day at 8 AM.

When replacing a VGreen or any motor, are there any types of parts you want to replace along with the motor?

Yes. We absolutely recommend replacing your shaft seal any time you replace a motor. Your mechanical shaft seal is the most important piece in maintaining life.

To start finding your new replacement motor, visit Inyo’s Motor Section. If you have any questions about Century motors, feel free to leave a comment below.

PSC Ep. 64: Can I replace bearings on a variable speed pump motor?

April 4, 2018 Matthew Simmons
In today’s episode of Poolside Chat, Rob and Matt tackle another common swimming pool question:  Can I replace bearings on a...
Read Now 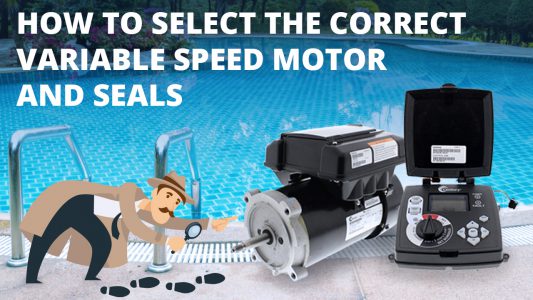 June 16, 2021 Matthew Simmons
The main reasons for switching your single or dual speed pool pump to a variable speed (VS) are economical. With a...
Read Now

5 Reasons To Get A Variable Speed Pool Pump Motor

March 28, 2018 Rob McLintock
A swimming pool pump motor is one the largest consumers of household energy. In fact, they are second only to air...
Read Now