A question that popped up a bunch when I began in the pool business was “if I use 230 voltage will it save me money?” To be honest, I thought I knew the answer and that hubris made me look like a fool my first day. But after a little research I quickly found the knowledge and now it’s time for you to be let in on this secret. My first and admittedly ignorant understanding was that the power consumption/cost was linked solely to amp usage. That led me to believe that 230 was naturally more energy efficient than 115. After all it uses half the amps, but not so fast Mr. Jump-to-Conclusions – that is wrong. Power bills use Kilowatts Per Hour as their unit of measurement. And the formula to figure out watts usage requires both voltage and amperage.

The watt usage is virtually identical when calculated in this manner. Part of the reason watts is the same is because of the way the two voltages are wired. The amp rating shows the usage per “hot” wire, also called load-bearing wire. A 115 volt circuit is wired with one hot wire that carries the current with one neutral and a ground wire; while 230 volt circuits are wired with two hot wires and a ground.  The amp load is split between the two hot wires which provides the somewhat deceptive amp draw on the motor label.

Most major countries outside of the US (especially in Europe) utilize 230 voltage for their electric grid while the US uses 115 as our standard. Early development of the US electric grid took place before most of the world, and coincided with a period during which light bulbs and appliances were very susceptible to failure due to high voltage. This made the American power companies install and standardize the 115 volt power stations we see today. By the time Europe was building its electrical infrastructure, most of the kinks had been worked out for bulbs and electrical components to safely run on high voltage. This was perfect timing as 230 voltage is a more efficient way of conveying electricity over long distances.

Most houses in the US still have access to 230 volts as you may have noticed when installing heavy duty appliances such as a washer and dryer or electric range. In the pool industry, pool motors with a horsepower output of two or above almost always are 230 volt hook up only. This is because with high voltage comes great amperage.

When we flick the switch on a monster of a 3 HP  motor, that mechanism demands amps to be able to fire the capacitor, switches and windings. If there is a delay in amps reaching the motor, it may cause the motor to overwork and overheat to compensate. This extra work put in by the motor means it is more likely to fail earlier than it should.

Think of it as if we were sipping a thick milkshake but all we have is a thin straw. When you begin to sip on the straw no matter how hard you try, you will go red and eventually quit with your thirst not quenched. That is essentially what happens to a big motor using 115 volts.  It’s got a fever, and the only prescription is more amps. Now switch that tiny straw with a hefty wide straw, your work load lessens, you’re cool as the other side of the pillow. Voltage is the straw, and the amps are the milkshake. Voltage is just there to help convey the amps to the unit. 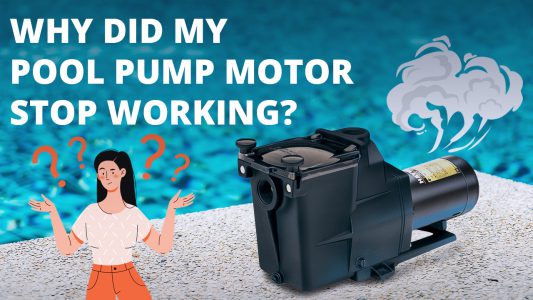 Why Did My Pump Motor Stop Working?

March 11, 2021 Charlie Ramirez
As a pool owner, one of the most annoying moments is walking to your pool and noticing your pump is off....
Read Now

September 4, 2014 Matthew Simmons
Every craftsman has their favorite tool.  A carpenter uses a hammer, a painter has a brush and a pool man has...
Read Now

Can I Repair My Pool Equipment?