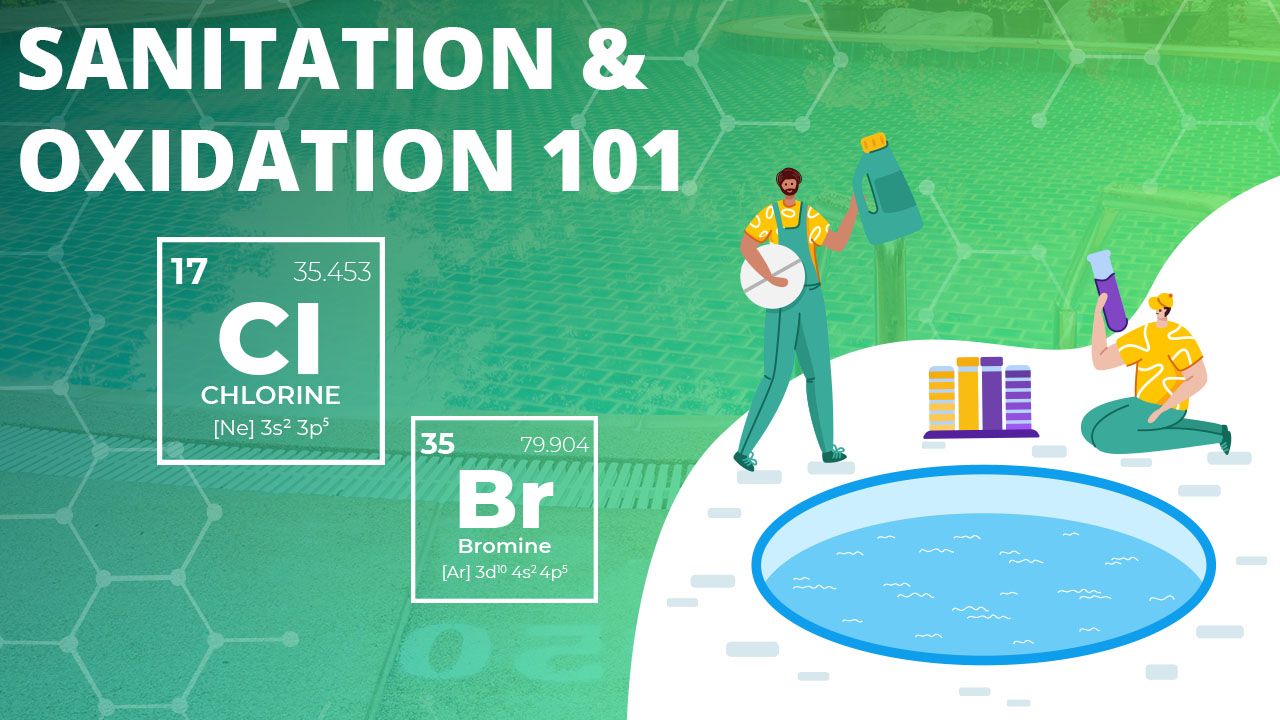 Sanitation and Oxidation 101 by Taylor Technologies is the basic foundation you need to maintain a balanced and healthy swimming pool. In short, you will learn which products are good for your pool, which ones work, and most importantly, which ones to avoid.

Sanitation Is NOT Oxidation

The very first thing we need to cover in Sanitation and Oxidation 101 is definitions. Despite popular belief, sanitation is not the same as oxidation.

Sanitation: the destruction of harmful or potentially harmful microorganisms in the pool such as bacteria and algae

Oxidation: the destruction and/or removal of organic contaminants such as dirt, dust, pollen, and personal care products

As pool owners, you want products that sanitize your water AND oxidize it. To put things in perspective, let’s compare the organic presence you might find in your pool.

If that weren’t enough to convince you to sanitize and oxidize your pool properly, this will.

The two most common products used for sanitation and oxidation are chlorine and bromine. In fact, these are the only two products that do both.

Once chlorine interacts with compounds such as urine, sweat, bacteria, etc., it forms chloramines. Chloramines are what we refer to as combined chlorine (CC). The CC levels are chlorine that no longer has disinfecting power. Essentially, it is useless.

Total chlorine (TC) is simply your FC plus your CC. Your TC should not be less than the FC level

Bromine is the second product that sanitizes and oxidizes at the same time. The most common form of bromine comes in tablet form or BCDMH.

It is a slow-dissolving, one-step system that contains some chlorine. The other form is DBDMH, which contains no chlorine.

As they say, once a bromine pool, always a bromine pool. The reason is that bromine is ‘heavier’ than chlorine and will always overpower and convert the chlorine to bromine. In fact, the oxygen found in BCDMH bromine helps recharge the bromine so that it stays an effective sanitizer.

Unlike chlorine, bromine does not have a commercially available stabilizer. This makes it more ideal for indoor swimming pools and spas and covered spas found outdoors. Additionally, it does not break down in hot water like chlorine, making it more efficient. This is why it is used more in spas.

However, for commercial properties, testing is typically regulated locally. We recommend checking with your state and local code to determine how often you need to test.

Sanitation and Oxidation 101: Other Methods

A salt chlorine generator, in short, converts normal table salt into chlorine. This eliminates the consistent need to add chlorine in your pool. Of the four other methods, salt systems are the most popular. Although the up-front costs are typically higher, the overall costs tend to be lower than using traditional chlorine.

Ozonators use corona discharge (CD) or ultraviolet light to generate ozone. In both scenarios, oxygen is converted to ozone. However, because ozone cannot be maintained for long periods of time, you will have to use an additional sanitizer in your pool.

Ionizers, also known as mineralizers, generate copper and silver ions to provide algaecide and limited biocidal properties. However, keep in mind that an ionizer is neither an oxidizer nor a sanitizer system. As a result, this system requires a supplemental chlorination system. We do not recommend using bromine with ionizers.

How to Select an Inground Pool Sanitizer

February 6, 2017 Matthew Simmons
Hello and welcome Inyo fans, this is a continuation of Inyo Pool’s equipment selection series. In this chapter, we are focusing...
Read Now

Why Ozonators Aren’t That Great

April 30, 2015 Charlie Ramirez
Over the last few years, you may have heard all about the greatness that are ozonators. Ozone, in fact, is a...
Read Now

Someone Pooped in My Pool. What Do I Do Now?

April 3, 2017 Matthew Simmons
This is a nightmare scenario for any pool owner. Someone’s chicken nuggets don’t agree with him/her and before know it, you...
Read Now