Will a Salt Chlorine Generator Rust out My Above Ground Pool?

Does a Salt Chlorine Generator cause rust in an above ground pool? This has been a big controversy in the above ground pool industry for many years now. You talk to one pool guy and he’ll say, “It absolutely does.” Yet when you talk to another he’ll say, “No, it doesn’t.” Someone trying to sell you a salt chlorine generator will of course tell you that it would not cause rust while some above ground pool manufacturers will say that it would. So then what’s the answer really? What do I think? Well, I thought you’d never ask. Let me tell you.

My opinion is that it does not cause rust. This statement is pretty definite. It sounds like a statement someone would make if he/she were trying to sell you one or convince you to do something. However, that’s not me. I really don’t care whether or not you buy a salt chlorine generator for your pool and it doesn’t matter if you agree or disagree with my opinion. So now that you know I have nothing to gain, here’s why I think it will not cause rust.

My opinion is that salt systems do not cause rust on above ground pools.

So How Would a Salt Chlorine Generator Cause Rust Anyway?

This is a question no one ever seems to ask. They just think salt plus metal plus moisture equals corrosion. It makes perfect sense, right? Well yea, it does, except I’m from the real outside world and in that world it’s just not that simple. Back to the how.

First, a salt chlorine generator produces chlorine. Some think it is this chlorine that is produced that causes the rust. Sorry, but that can’t be true as about ninety-nine percent of all above ground pools use chlorine even if they don’t have a generator. So, if that were the case then all above grounds would get rusty and they don’t.

Others say it’s the salt content that is in the water that causes the corrosion. This is at least closer to a real possibility, but I don’t think so. A salt chlorine generator unit requires a certain level of salt to be present in the water in order to work. That level is only about a tenth of the salt levels present in the average ocean. Some say they can feel or taste the salt in a salt pool, but that is clearly subjective as the salt levels are really pretty low. In addition to this, saltwater surely is corrosive to metal but so is unsalted water.

Any moisture that is continuously in direct contact with metals will cause some degree of corrosion. Certainly, metals that are directly exposed to really salty water will have a greater rate of corrosion than metals that are exposed to unsalted water. However, check this out. The water in an above ground swimming pool is not directly exposed to its metal structure. This seemingly rarely observed fact kind of makes the whole question surrounding whether the salt content of the water will cause rust a moot point.  Then there’s still the question of fumes.

The water in an above ground swimming pool is not directly exposed to its metal structure.

Does the Water in a Salt Pool Create Corrosive Fumes?

This is really the last hope for a salt chlorine generator to rust out an above ground pool. Usually when I visit a pool where the owners think their salt pool caused rust, it’s very often the metal parts above the waterline that are rusted. More specifically, the metal parts under the top rails are the most common places for rust. In that area under the top rails, fumes could gather on a regular basis causing premature corrosion. This absolutely happens. So, the big question is, “What creates these corrosive fumes?” Well, we know that chlorine in the water can create these fumes, but that’s not the fault of a salt chlorine generator as almost all pools have fume causing chlorine in them. So now it comes down to whether the salt content in the pool produces these fumes that corrode the higher parts of an above ground pool? To know for sure, you’d have to ask a chemical scientist and take his word for it. Personally, I think even if it does it wouldn’t be enough to greatly increase the metal’s natural rate of corrosion. Sleepy yet? OK, enough with the technical reasons. Now it is time for the real reason.

One simple word separates my opinion on this topic from most others here on this perfect planet called the Internet. That simple word is observation! For the last 29 years I’ve been building, rebuilding, relining, repairing, removing and replacing all types of above ground pools from all makers and all models. I’ve installed brand new pools and worked on above grounds that were more than 20 years old and every age in between. These pools have been right on the ocean, near lakes, high and dry, and in wetlands. Some were indoors, buried all the way in the ground, halfway in the ground, and totally above ground in open fields and deeply wooded lots. There were pools with wood decks built around them and some with screen enclosures. I’ve built and worked on above grounds used commercially for swim lessons, dog jumping competitions, and fisheries. The pools I’ve repaired or built have had every type of filter, every size pump, some with extra return lines and some with main drains. I’ve been involved with plumbing of all types of equipment, add-ons like ionizers, chlorinators, ozone generators, and, of course, many salt chlorine generators.

So with all this observation of above ground swimming pools in just about every imaginable scenario, I have been able to find consistencies and patterns that cause things like rust and leaks and so on. I have seen pools rusted prematurely in just about every location – from pools that were installed on top of the ground and were always dry to ones put in the ground that were always wet. In all these different places, there were just as many in the same extreme locales that didn’t have a speck of rust on them anywhere as there were that had a lot of rust. The same is true for salt clorine generators as there are some pools with them that get rust and some that don’t get rust. The same with pools that don’t have salt chlorine generators as some get corrosion and some don’t get corrosion. To make it simple, I’ll say this: I have never been able to make a connection between premature corrosion and salt chlorine generators.

I have never been able to make a connection between premature corrosion and salt chlorine generators.

Lord knows I’ve tried. I would love to be able to point a finger at salt chlorine generators and say they cause rust, but I can’t. I believe this because I just haven’t seen it consistently. So there you have my opinion. Certainly some pool owners will disagree. Many have and that’s cool. I get it especially when you have a pool with a generator and it gets rust. But keep in mind that pool owners who have the same rust in the same area on the same model but don’t have a salt chlorinator will blame it on something else. And that, I must admit, is a little comical to me.

63 thoughts on “Will a Salt Chlorine Generator Rust My Above Ground Pool?” 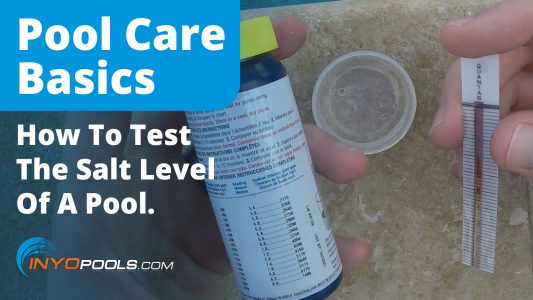 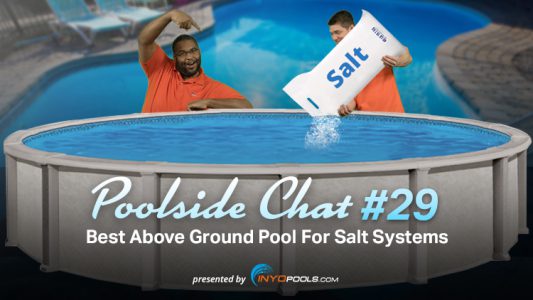 May 11, 2016
Best Above Ground Pool For Salt Systems In this video, we take a look at what is the best above ground...
Watch Now