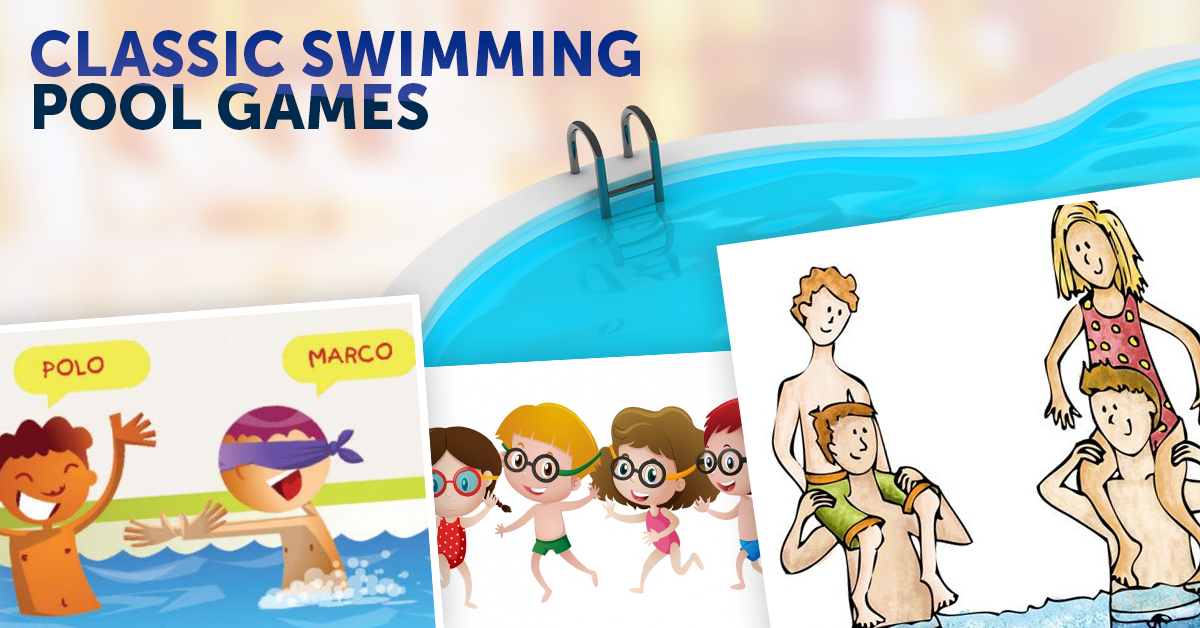 Countless hours of my childhood were spent in our backyard pool. We didn’t need the latest and
greatest toys to keep us entertained. A little resourcefulness and a couple friends were all that
were required. This trip down memory lane led me to reminisce about these classic swimming
pool games.

This is the quintessential swimming pool game. To this day, when I hear the name Marco I
instantly think of this game and yell, “Polo”. The game is named after the 13th-
century Italian explorer, but none of that matters to kids looking to have fun.

Marco Polo requires at least two kids, but the more the merrier. One kid is the designated
Marco. The Marco must close his or her eyes while trying to tag the other participants. To
pinpoint the other kids, the Marco will shout “Marco” and the other players will holler back
“Polo”. The first kid to be tagged becomes the new Marco. This game is best played with a crowd of kids. One kid is selected as the shark and the rest are
minnows. The shark starts at one end of the pool and calls over the minnows who start on the
opposite side. The goal is for the minnows to swim to the opposite side without being tagged.
Any tagged minnows become sharks in the next round. The sharks continue to nab minnows
until the last one is tagged. The last minnow left wins and begins the next game as the sole
shark.

Everyone can thank Nathan, our video producer, for bringing this one to my attention. Above
ground pools are perfect for a whirlpool, but the same effect can be accomplished in an in-
ground pool too. This game requires several participants. Everyone will need to move slowly
together in one direction around the edges of the pool. As the circular current begins, the pace
will pick up. Everyone can pick up their feet and float with the momentum of the whirlpool. Start
again once the movement subsides.

Leaf collection sounds like another tiresome chore. So why not turn it into a contest? Kids will
love it and parents will love it even more. There is only one goal in this game and that is to
collect the most leaves. Kids won’t realize they’ve been duped until years later. As I was writing
this I remembered my Nana visiting and always challenging me to “bed-making contests”.
Needless to say, those beds were made with precision and that’s just how your kids will attack
those leaves. Mothers everywhere would love to forget about this game. Nonetheless, as long as there are
pools, chicken fighting will exist. Four competitors are required to engage in chicken fighting.

This 2v2 game consists of one base and one attacker positioned on each team. The attackers
climb onto the shoulders of the base. The goal of the game is to push the opposing team into
the water.

As with any game, there are a couple rules. Only the two attacking players at the top can battle
by pushing. Hair pulling, scratching, biting and punching are outlawed. Base players are only
there to stabilize the attacker and to move around the pool. They are not permitted to engage
physically.

Endurance, speed and good old fashioned breath-holding ability are required for submarine
racing. Swimmers start at one side of the pool and begin to swim underwater. If a short pool is
used and the swimmer reaches the opposite wall, the swimmer can turn around underwater and
head back the other way. Whoever makes it the farthest underwater is crowned champion. If
you have a couple kids at different ages, it’s a good idea to have the younger one start further
up in the pool. This will help level out the playing field.

As with any breath-holding type of game, there have been cases of kids passing out or even
drowning. Please explain to kids that they shouldn’t fight the urge to breathe and to come up for
air when they start to feel that urge.

Weighted pool toys are often used to play treasure diving, but they are not necessary. We used
coins and pebbles when we were kids. To play, the weighted objects need to be spread around
the pool. Once the objects are in the pool, the participants can dive and begin collecting. The
pirate who collects the most treasure wins.

Treasure diving games can have variations. It can be played by assigning points to certain
objects. This variation allows a slower pirate to have a fighting chance. Another option is to set a
time limit and let one pirate dive at a time. The player who gathers the most treasures in that
time frame is hailed as the victor.

We strongly recommend adult supervision when kids are partaking in any of these classic
swimming pool games.