Has your pool water ever turned green? It’s okay, you’re part of an elite club of green pools that includes some well-known pools.

For the last four years, we’ve been waiting for the Rio Summer Olympic Games to arrive. And although there was much controversy leading up to the games, the headlines did not deter us from watching, rooting, and enjoying Team USA all summer. From volleyball to gymnastics to swimming, each sport had its own story of glory. For swimming, though, these stories became headline news for different reasons. And no, we’re not talking about Ryan Lochte.

If you watched the diving or water polo events then you noticed the pool’s color changed what seemed like overnight. The diving pool and the water polo pool turned from a beautiful, clear blue to a deep, bright green. Although it happened on separate days, speculation and questions mounted about the safety of the athletes.

How could the pools turn green in an international event that provides tons of funding and press? Brazillian officials offered their explanation as to how this happened. However, after consecutive days of the pool’s condition getting worse, their explanations changed… for the worse.

Let’s go through their list of explanations as to why the pool turned from blue to green and see if  their reasoning is likely.

Why Did The Pool Turn Green?

When news first broke about the discoloration of the diving pool, Brazillian officials quickly put out a statement to calm the storm. According to reports, the color of the pool changed because of a “proliferation of algae due to the lack of wind and heat.”

Does this reasoning sound likely?

We all know algae can form for several reasons. Either you are not maintaining the proper chemical levels in your pool or you have an undersized pump and filter, preventing proper filtration and turnover rates. If not monitored, it is very easy for a pool technician to lose control over the chemical levels in a commercial pool. However, the lack of wind or heat would not be a reason for a pool’s color to change. In fact, direct sunlight can cause your chlorine levels to deplete.  So, it would actually make more sense if there were too much sun hitting the pool, not a lack of, causing a proliferation of algae.  Let’s also not forget these pools are indoors. Although a green pool is typically indicative of algal blooms, in a pool that size it is highly unlikely the algae bloomed that quickly.

After two days of conditions getting worse, the second round of explanations surfaced. First, Brazillian officials confirmed that the lack of wind and heat was not the cause of the pool’s discoloration. (Thanks?) Secondly, they “confirmed” that too many people in the pool at once caused the pool to turn green.

Does this reasoning sound likely?

I am glad they admitted that their first explanation was, indeed, inaccurate. However, let’s dig a little deeper to determine how alkalinity works in pools.

In reality, if the total alkalinity were too low due to too many people using the pool, then that would mean the athletes were really acidic.  Although unstable pH levels have the potential to cause chlorine to lose its effectiveness, it does not happen overnight.

Still, Brazillian officials were adamant that the pool’s color did not pose any health threats to the athletes.

Is the pool safe to swim in?

After another day of the pool’s conditions getting worse, athletes began to complain of both the terrible smell  and their burning eyes. After some discussion, Rio organizers admitted to pouring 80 liters of hydrogen peroxide into the pool in an attempt to… I’m honestly not sure. Hydrogen peroxide neutralizes chlorine’s ability to fight off contaminants in the pool. Hydrogen peroxide is, in fact, a legitimate method to clean your pool; it is not intended to be mixed with chlorine. (Here’s an interesting discussion on the use of hydrogen peroxide as a disinfectant.)

Olympic officials had no choice finally but to close the pool. A sporting event like synchronized swimming relies on the ability to see one another while underwater. These athletes cannot compete without a clear swimming pool.

We did not get the actual explanation for the pool turning green until after the pool was refilled and balanced. A representative from the International Swimming Federation (FINA) stated the unusual water color observed during the Rio diving competitions is because water tanks ran out of some of the chemicals used in the water treatment process.

As a result, pH levels in the water were out of range causing the discoloration. Water tests were performed and concluded there was no risk to the health and safety of the athletes.

In short, the real reason the swimming pools turned green is from improper, or not enough, chemicals in the pool. Like most pool owners, the Rio organizers relied on automatic chemical dispensing systems to administer chemicals  properly into the pool. In my opinion, they are a great investment. Having these systems, though, do not negate the fact that you still have to check and monitor chemical levels.

As the Rio organizers found out, in front of the world, you cannot blindly rely on machines. 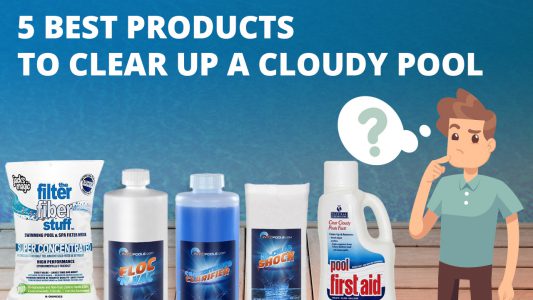 5 Best Products to Clear Up a Cloudy Pool

August 18, 2021 Matthew Simmons
If you own a pool long enough, you are going to face the daunting task of cloudy water. Murky water can...
Read Now

The Relationship Between Chlorine and Cyanuric Acid

October 17, 2016 Charlie Ramirez
We all know that chlorine is necessary to keep our pool sanitized, but do you know the relationship it has with...
Read Now