A lie, I say!  Pump manufacturers may categorize it as a “fudging of the numbers” but let’s call a spade a spade. They are at best trying to mislead the homeowner. We take phone calls from customers every day attempting to match their current motor label information to a new replacement motor and a confused groan usually follows our explanation of the result.  Well, we finally had enough of the manufacturers’ trickery and we want to put you in the know. Time to break it down like a fraction.

My Kingdom for a 5 Horsepower

When you’re talking to a “car guy” about his vehicle, the audience can see him puff up his chest after he says some huge horsepower rating.  It is a source of pride for any man – and some women – who like to know they have the biggest, baddest thing on the block.  Well, manufacturers of spa pumps play on that machismo factor and use it while rating their pumps.

When a spa owner calls us with a 2 HP motor part number which cross references to a 1 HP replacement, it usually results in a protest of “But I have a 2 horse power.”  Well, you do have a “2 horse power” but it is not what you think.

Waiting for That “SPL” Someone?

Before we get too in deep in the minutia of motors, let’s talk about the crux of the matter – the service factor. The motor has a listed HP but its actual total HP is calculated using the service factor as a multiplier. So that hulking 3 HP motor sitting on your pump could be a 2 HP paper tiger. The SPL under your motor’s service factor rating means that it is a special rating per the manufacturer’s request. Special is not always good.

That “SPL” rating is a sign that the service factor is less than one which allows them to inflate the HP rating. This has the triple effect of boosting the rating, your pump’s ego, and its price tag.  Below is a chart taken from A.O. Smith-Century showing comparative SPL horsepower ratings to their flat service factor actual output.

As you can see the ratings on a motor are skewed by that one number called the service factor.

What is the Trick?

When faced with a spa pump owner convinced they have a 4 horsepower motor but the part number calls for a lower HP, we usually refer to the amps rating. When labeling a motor the maker can adjust the service factor but they cannot hide the electric usage of the motor. Whether the pump is normally rated or has the SPL stamp, the amp ratings of the two motors are virtually identical.

If you don’t know, now you know…

Well, now you know the deep, dark secret of spa pumps and it time for you spread the word.  We write this blog mainly for our own sanity during the pool season so we do not have to explain a hundred times a day.  But if you have more questions about spa pumps or anything pool/spa related, give us a call at 877-372-6038 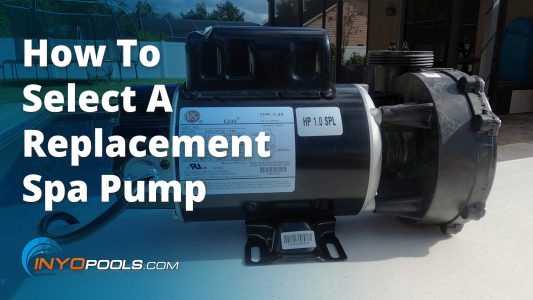 How To Select a Replacement Spa Pump

February 16, 2021
In this video, we go over the different ways to find the correct replacement spa pump....
Watch Now

Can I Go With A Higher Horsepower Pump?

December 4, 2014 Matthew Simmons
The proper horsepower for your pool pump depends on a number of factors.  So before you jump on the bigger-is-better bandwagon,...
Read Now

September 8, 2014 Charlie Ramirez
Are All Motors Created Equal? If you are one of the lucky ones who can still read your motor label, you’re...
Read Now