About ninety-nine percent of all above ground swimming pools are built directly on the earth. So, guess what… The earth is home to all kinds of critters and bugs. Most of these things living in your backyard won’t affect an above ground’s bottom, but some will. And, if I made a list of the peskiest critters affecting above grounds, moles would be at the top.

I haven’t seen moles damage liners much to the point of needing replacement, but I have seen them cause extensive damage to a nice smooth above ground pool bottom.  Getting rid of them is almost impossible and preventing them from burrowing under the pool’s liner is really difficult too. I get many people with existing pools ask about how to stop moles and my short answer is that I don’t know. I do know some things about moles that may help, so read on if you’re having issues with moles. A mole is a little animal that lives just under the surface of the earth. They are the size of a small mouse, always have dark fur, and look like a mouse with deformed feet and a weird nose. When I say they live “just under”, I mean just a few inches. This is a problem for above grounds, because when moles move around they make a tunnel just under the earth’s surface that displaces it. By the way, this is not good for that smooth pool bottom I just made.

Moles aren’t social creatures, but their territories can overlap resulting in a backyard having more than one. They move around a fair amount, so it only takes one or two to make pretty good ruts in a pool’s bottom.

Some ask me if they have moles. You can’t always tell if you have them, but if you go outside in the morning and see a trail ofslightly elevated earth, then that’s amole trail.

Often there will be no evidence of moles, but you’ll have them. Often they are living in yards with above ground pools and never go under them. No issues there.

Getting Rid of Moles

This is not my field of expertise, but I have heard some things. I’m sure there’s a master mole exterminator somewhere that knows how to kill them or some kind of “mole whisperer” that can talk to them and train them not to travel under a pool, but as an observant pool installer, I can only tell you this:

Get a young cat, don’t feed him much, and make sure he lives mostly outside. Young cats love to find and kill moles (well, maybe not kill, but play with them until they stop

moving, forever). It’s kind of cool when you go out in the morning to get the paper and the cat has left you a dead mole by the front door. All right, so nobody gets the paper anymore, but you’ll eventually go outside and find your cat’s gift  – the dead mole.

To me, cats are the best way to control the mole population, but there are some chemicals available that supposedly get rid of them too. I’ve heard homeowners resort to poisoning food, gassing, and setting traps to get rid of their moles. However, most have admitted to having little success. Please don’t let me discourage you, though, as I’m not an exterminator.

How Do I Stop Them From Damaging my Pool Bottom?

OK, so if I can’t get rid of moles, how do I stop them from causing damage? Damage caused by moles to an above ground pool’s bottom can be extreme, but usually it’s just some annoying ruts that make it harder to keep the pool clean. In almost all cases, this type of damage is only corrected when the pool liner gets changed. This is usually years down the road, but since the old liner has to come out, it’s a good time to think about how to stop moles from continuing to damage the pool bottom. Here are a couple of things people have done. Some things will work for sure and some won’t. I’ll list them from the least expensive to the most expensive.

I. Install a Liner Guard or Gorilla Pad

These pads won’t at all deter the moles from tunneling under the pool and won’t stop the ruts they make. A liner guard will prevent the ruts from causing any damage to the liner, because the pad will always be positioned between the liner and anything potentially sharp in the earth.

II. Installing rigid foam sheeting on the entire floor of the pool

Again this won’t stop the moles from going under the pool. You just won’t see or feel the tunnels, because they’ll be under the foam boarding. The more expensive, thicker and more rigid foam sheets have to be used for this. Less dense and thinner foam will eventually thin and contour the ruts created below. Cut these rigid foam boards to fit and seam them tightly together using duct tape.

III. Install a mole wall around the perimeter of the pool

Moles travel below the ground so when I say “wall” I mean a wall under the surface. I have seen homeowners use continuous rigid plastic sheeting that is about one foot wide and bury it all the way around their pools. No one knows how deep a mole will travel, but going one foot down seems to do the trick. NOTE: A customer of mine used 1”x6” pressure treated wood and buried it all the way around their pool and still had mole intrusions. This is by far the best way to solve this and any other problem with an earth bottom, but it is super expensive. If your mole issue is so bad that you are going to make a concrete floor for your above ground, then good for you as the problem will be solved. You may need to put in some OT at work to pay for it, though.

When making a concrete bottom for an existing above ground, don’t pour too close to the wall. Leave at least a gap of a couple inches all the way around and use foam coving. Also, you’ll need to purchase a liner guard to go between the concrete and the liner.

35 thoughts on “Moles and Above Ground Pools”

What are the Electricity Requirements for Above Ground Pools?

January 22, 2016 Dan Dougher
This may not sound possible, but way back in the eighties I built an above ground swimming pool at a home...
Read Now 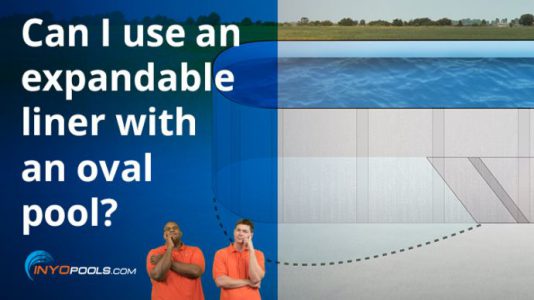 Can I use an expandable liner with my oval pool?

April 14, 2017
Can I use an expandable liner with my oval pool? In this video, we look into whether you can use an...
Watch Now

Sinking an Above Ground Pool in the Ground