Let’s get one thing out of the way, freshwater chlorine and saltwater pools are both chlorine. Though seemingly different, these two use chlorine to keep your pool nice and clean. In our following discussion, we will debate which is better: traditional chlorine (i.e. liquid chlorine and tablets) or a saltwater generator. Let’s go.

It is the standard for keeping your pool sparkling clean. Chlorine tablets and liquid chlorine are a relatively simple way to maintain a bacteria-free environment. Liquid chlorine and its tablet form are available in pool stores, big box stores, and even grocery stores if you’re in a pool-loving state like Florida.

Liquid chlorine can be poured directly into your pool or you can use a Stenner pump (peristaltic pump) to dose as needed. Sold by the jug, pool-grade chlorine has roughly 12% concentration of active chlorine in the solution. A less expensive alternative is household bleach which contains chlorine, but at a lower concentration of eight percent.

Chlorine tablets are made of a compound of chlorine and cyanuric acid (CYA). The acid protects the chlorine from “baking-off” due to UV rays. CYA’s nickname is sunscreen for chlorine. The most common chlorine tablets are made of trichlor and dichlor. The trichlor molecule contains three chlorine and one CYA molecule, while the dichlor contains two chlorine atoms and one CYA molecule. The trichlor packs more of a chlorine punch and is less expensive.

How does a salt chlorine generator work?

The process of turning the salt (sodium chloride) into usable chlorine is called electrolysis. Excuse the next few lines as it involves science. The sodium chloride molecule is made of one sodium molecule and one chlorine molecule. To make that chlorine active and a bacteria-killing juggernaut, we have to break the bond between the two. This is where the salt cell comes. The cell contains an array of titanium plates, with a slight (and safe) electrical charge applied. As the saltwater travels over these titanium plates, the salt molecule strikes these plates, shocking the molecule so that it breaks the atoms apart. Sodium goes one way and chlorine goes the other. The chlorine is now free to seek and destroy all bacteria and algae lurking in your pool. And once the chlorine has done all it can do, it bonds with one of the lonely sodium atoms again so that the electrolysis process can start all over again.

The use of a salt chlorine generator means you virtually eliminate the use of chlorine tablets and liquid chlorine, as well as the hassles that come with handling both. You still need to balance your other water chemistry levels like pH, alkalinity and CYA which we cover in the article: Water Chemistry For Saltwater Pools.

OK, now that we know who the contenders are, let’s see how they size up. At the end I will give you my verdict of my favorite.

You will not find another form of sanitation cheaper than freshwater chlorine. Traditional chlorine is cheaper, because you’re basically buying a mixing vessel with pipe connections. There are no electronics or other doodads to spike the cost. A chlorine float is essentially a chlorine teabag (trademark pending) that holds a few tablets as they slowly dissolve. Floats are about $15 (if that) and get the job done. Though, they have a downside of not allowing you to control how much chlorine is dosed. That is why I suggest an in-line or offline chlorinator to get you optimal control for the price point.

Chlorine generators are expensive, and there is no getting around it. A generic brand will cost you $400 and up, but then you may have hardware issues, or if you go with the tried-and-true name brands like a Pentair IntelliChlor or Hayward AquaRite the bill could be more than a thousand.

Because we know how easy installing a chlorinator or salt generator can be, we do implore you to read up on installing it yourself. You could save a chunk of change and get good sense of how everything works. A tablet feeder or a salt chlorine generator can be installed by a regular homeowner without the help from a professional. If you are planning on using a professional, let’s see the cost.

Tablet feeders are relatively easy to install. There is an in port and out port or for offline models, an in feeder tube return tube. Chlorine floats are even easier, hence why they are free. Simply fill it with tablets and drop it in the pool. The installation of tablet feeders is usually connecting pipe and PVC glue, but installers will still charge the full hour or a flat fee.

Salt chlorine generators generally have three parts, namely the salt cell, power center and flow switch, which all require plumbing, wiring, and/or mounting. The process is a little more involved, but nothing handy pool owners could not do if they were so inclined.

Winner: Freshwater, but if you do the work yourself it’d be a draw. Pool chemistry and sanitation needs can vary greatly for pools in different states, or even if they are in the same neighborhood. The need for chlorine is dependent upon the exposure to sunlight, debris, pool surface, and current water chemistry. If your tablet feeder is high in CYA, it will take a higher chlorine load to counterbalance it.

And a reminder, salt chlorine generators only produce chlorine. You will still need to add chemicals to adjust for pH, alkalinity, and hardness. Also, on the rare occasion you will need to shock, but the scheduling of these events is greatly reduced.

Luckily, the good people over at HomeAdvisor have put together an interactive graph to give you the average pool maintenance costs in your area. This is my favorite category, because this is the one most likely to affect the user. Installation and equipment costs are shortsighted, but the time and labor spent on keeping your pool water correct is something you will deal with over years. You can recoup money, but you can’t recoup time spent laboring over chemical testers.

Chlorine pools demand a vigilant eye as levels can turn south quickly. Some methods of maintaining your pool will have you testing your water every couple of days or once a week and do not forget having to handle the toxic caustic chlorine tablets.

Salt chlorine generators are pretty much self-sufficient and self-diagnosing. Generators remove the guesswork from pool maintenance by using the control panel’s error code and alert light display. When your salt levels are low, a cell needs cleaning, or any number of other issues that can arise, the control panel alerts you.

Salt generators like the Autopilot have a sensor that reads water flow, salt levels, and water temperature to keep chlorination production at optimal levels. Tablet feeders come with a control knob.

Saltwater has the edge in this category because its sanitizing agent is a purer form of chlorine. The chlorine produced by the salt cell is less harsh than the trichlor and dichlor mixtures found in chlorine tablets. The water protected by a salt chlorine generator has a softer feel and is less likely to cause dry skin and hair.

Despite the common beliefs, chlorine does not cause green hair, stinging eyes or eye irritation. It is the lack of chlorine that causes these problems. These issues can occur in freshwater chlorine as well as saltwater, but are more likely to happen in pools sanitized with liquid chlorine or tablets.

Common issues and their causes:

The process of dosing your pool via dissolving tablets can be an inexact science. Tablets dissolve at various rates, depending on how the water is introduced to the vessel and the quality of the tablets. This type of imprecision leads to fluctuating chlorine levels.

Affect on Your Pool Equipment And a big concern for homeowners considering saltwater is how will it affect the aforementioned elements and also deck chairs. Water is not is the only thing in your pool, as you also have metal railings, plastic skimmer and drain covers, and vinyl toys or liners. Those thinking about saltwater may think they have to switch out all their pool equipment, but that is big no.

My choice for the best sanitation system goes to…

The reasoning of my verdict stems from years of customer stories, complaints, bragging and pool experience. The overwhelming experience for pool owners and servicers is that a salt pool is the way to go. Don’t get me wrong – it has its drawbacks. If you are on a tight budget or do not plan to stay in the house for long, then a saltwater pool is likely not worth the investment. Also if you like the workout of lugging around chlorine jugs to save on a gym membership, then ship the SCG. But for the average user who would rather spend time in the pool than working on it, saltwater is the way to go.

May 20, 2016 Dan Dougher
Salt swimming pools have absolutely been the rage for at least the last 15 years and they aren’t going away any...
Read Now

October 12, 2016 Matthew Simmons
In today’s episode of Poolside Chat, Rob and Matt tackle another common swimming pool question: At what percentage should I set...
Read Now 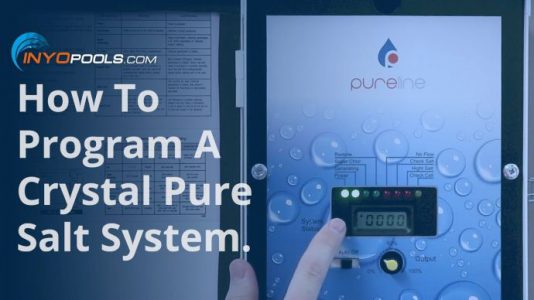 How To Program A Crystal Pure Salt System