“I’m programming my variable speed pump, and have a question. What speed should I set the pump on to make sure my salt system continues to work?”

The concern would be that if you run the pump at too low of a speed, it’s not going to trigger the flow switch; which tells the salt system to run or shut down. Basically, the flow switch is what goes after the salt cell. There’s a switch in there with a two-prong piece, basically with two points of contact. If there’s enough flow those two points of contact are going to touch telling the system to run. If there’s not enough flow, those two points aren’t going to touch and scan, so it’s also is not going to run.

The answer to the original question, every pool is different. There isn’t a set speed. Most of the salt systems are going to require 10 to 25 gallons per minute. Check your owner’s manual to see what your system’s going to require. What you want to do is start the pump on a low speed and kick the speeds up until the salt system says, “It’s okay. It has enough flow.”

To compensate for when your filter gets dirty, once you find that low benchmark, you want to actually set the normal filtering level like a couple of notches above, just so when your filter gets dirty and the flow gets restricted, your salt chlorinator out of runtimes or flow sensor isn’t affected. Set it a couple notches above and you should be good for those dirty days.

PSC Ep. 48: Should I use flexible PVC for my pool plumbing? 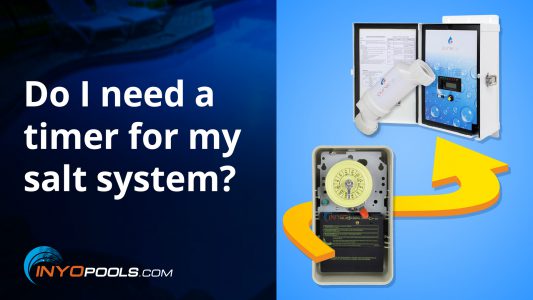 September 11, 2019 Matthew Simmons
In today’s episode of Poolside Chat, Rob and Matt tackle another common swimming pool question:  Do I need to put my...
Read Now

Poolside Chat Episode #32: Which Filter Sand Should I Use?

June 8, 2016 Matthew Simmons
This is Poolside Chat where every week we answer your questions on how to fix and maintain your swimming pool. Poolside...
Read Now