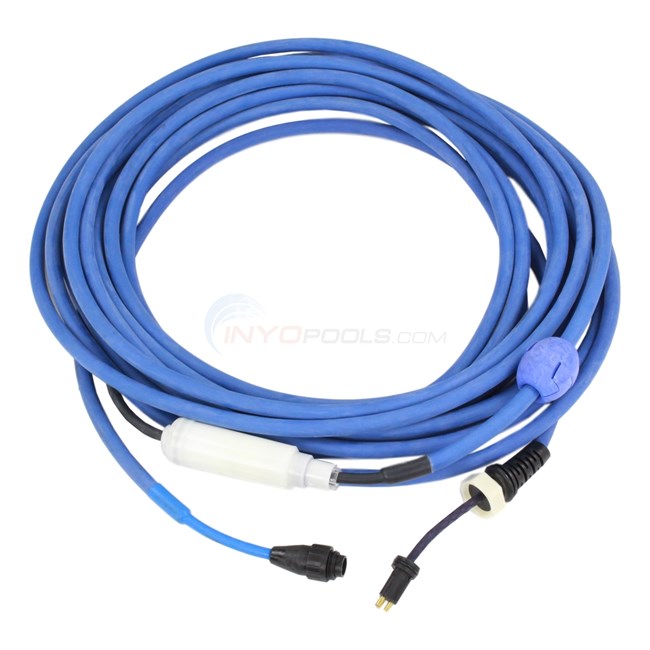 I Have a Maytronics Oasis Z5i pool cleaner and the swivel stopped working. But it doesn't look like the one pictured here. do you have this one and can I change it?

I have a Dolphin Supreme 4. Is there a non-swivel replacement cable available?
Reply

A  Answered on 6/12/2020 by InyoPools Product Specialist Patrick P.

Hi, No we only show this 9995873-DIY Swivel Version of the hose available for the Dolphin Supreme M4
Reply

Does this cable happen to work out for the Maytronics Dolphin Nautilus Inground Robotic Pool Cleaner with CleverClean | 99996113-US? I really hate that I spent so much money on this pool cleaner not to get the cable swivel or to be able to purchase the cable that has the swivel.
Reply

What is the right cable(s) for the Echo model?
Reply

Unfortunately, we do not carry parts for the Echo pool cleaner. You may be able to confirm the part number directly with Maytronics at (888) 365-7446.
Reply

Will this cable work for the Dolphin M400?
Reply

Will this work on Triton Plus PS. The software controlled anti-tangle really does not work and i want a swivel cable
Reply

This cable is not compatible with the Triton PS Plus.
Reply

This cable will not work with the Triton PS Plus.
Reply

Our local pool company diagnosed the cable as the issue with our dolphin M4 supreme. Is this part returnable if it does not fix our problem?
Reply

Good afternoon, at this time this unit is not a returnable item.
Reply

I have a maytronics dolphin wave 100, will this cord install as a direct replacement fit ?
Reply

Hi. Same story as the rest. Dog chewed the damn cord to the cleaner. Of coarse.... the expensive part. Will this cable fit a Nautilus CC Dolphin Cleaner? It looks the same.
Reply

A  Answered on 4/5/2018 by InyoPools Product Specialist Lennox H.

Will this cable assembly fit the Dolphin Dynamic?
Reply

A  Answered on 8/2/2017 by InyoPools Product Specialist Lennox H.

A  Answered on 7/7/2017 by InyoPools Product Specialist Lennox H.

Hi, DP. This is the correct cable for the Dolphin Supreme M4.
Reply

I have a dolphin active 20. The cord gets twisted up when in use. Does the swivel cord work on the active 20?
Reply

I just checked with Maytronics and, unfortunately, they do not build a swivel cable for your Dolphin Active 20. And none of the existing swivel cables can be adapted to the Active 20 cleaner. They are not interchangeable.
Reply

Will this work on the Dolphin Premier
Reply

A  Answered on 6/8/2017 by InyoPools Product Specialist Patrick P.

My &*%$#$% dogs chewed up the power cable from the power supply to the dolphin. How do I tell which cable I need for my version of the Dolphin (Premier). I can't find any numbers or model information on it.
Reply

A  Answered on 3/30/2017 by InyoPools Product Specialist Patrick P.

A  Answered on 3/6/2017 by InyoPools Product Specialist Lennox H.

Hi, Philip. The swivel is not sold separately, you will have to replace the entire cable depending on the model of your unit.
Reply

How long is this cable?
Reply

Is this the correct swivel cable for a Maytronics Dolphin Oasis Z5? Thanks
Reply

I bought this part from you and it has a female connector to the motor drive housing ( for sealing the water out) and my Dolphin Premier need a male connection. What is the correct part number?
Reply

It would be part number 9995853-ASSY is the cord that goes to the Dolphin Premier.
Reply

The part does not come with instructions. If you need assistance in repairing this cable, I would first recommend that you contact Maytronics at 1-888365-7446. You may also try searching online for additional video help.
Reply